Who is Will Traveler?

I don't know, and apparently Facebook (or someone) doesn't want you to know either.

Last week, I wrote a blog post about how I found myself briefly running the social media marketing campaign for ABC TV's new show, Traveler.

As you may recall, after watching the first episode of the series, I realized that ABC and the producers of the show had completely missed the social media boat. I logged in to Facebook to search for "Will Traveler," the missing character at the core of the show, and found nothing. Not even a basic Facebook profile. Talk about a lost opportunity.

So I did what should have been done in the first place. On May 31, 2007, I created a Facebook profile for Will Traveler.

I tried to make the profile as realistic and as 'in character' as possible, based on the facts I was able to gather from the show. I identified the school he apparently attended. I listed his interests (electronics, politics) and favourite movies (The Manchurian Candidate, The Conversation). I even cited a quote from Jack Kerouac, one of the character's favourite authors, and had Will join a Jack Kerouac Facebook group.

I was particularly proud of the photo I chose for Will; I thought it was suitably ambiguous and mysterious: 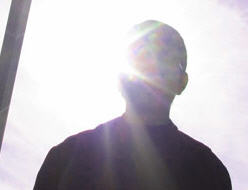 In other words, I created a Facebook profile for Will Traveler that fans of the show would instantly identify as his.

The next day, June 1, I began finding friends for Will. I started with me (Bill Sweetman) and my colleague Collin Douma (of Radical Trust fame). I had let Collin in on my little experiment, and he was all in favour of it.

Since there were already a half-dozen or so 'unofficial' Facebook groups devoted to the TV show (created by fans of the show), I had Will add the creators of those groups as his Facebook friends.

By June 4th, Will Traveler had a growing collection of Facebook friends and was starting to get unsolicited Friend requests and messages from fans of the TV show.

Clearly I was on to something. And fans of the show were having fun.

I immediately sent an email to Facebook, asking for clarification.

On June 5, I receive this response from "Justin" at Facebook:

"Fake accounts are a violation of our Terms of Use. Facebook requires users to provide their real names. Impersonating anyone or anything is prohibited. We will not be able to reactivate this account for any reason.  This decision is final."

Now, I totally respect Facebook's desire to enforce its Terms of Use, however I think they need to be consistently enforced. After all, thousands of cats have Facebook profiles. Last I heard, cats can't type. And there are at least 49 fake "Wentworth Miller" Facebook profiles. None of them have been disabled.

Puzzled and somewhat miffed by Facebook's seemingly arbitrary decision, I decide to try to find some answers

On June 6, I email Justin from Facebook and ask him how they ended up being 'alerted' to my Will Traveler account in the first place? Did someone (ABC perhaps?) lodge a complaint about it?

We will never know, since I never got an answer from Justin, and my Will Traveler profile remains disabled. In fact, as I write this, there is not a single Will Traveler profile on Facebook, although there are now 17+ Facebook groups (none created by ABC or the producers of the show) devoted to the Traveler TV show, including "Addicted to Traveler" (570 members) and "fans of ABC's Traveler" (227 members).

So who is Will Traveler? And why was his Facebook profile really deleted?

Your guess is as good as mine.

One thing I do know: ABC TV and the producers of the show missed a golden opportunity to use Facebook to promote Traveler.

For a few days earlier this month, I found myself running the social media marketing campaign for ABC TV's new show, Traveler.

After all, somebody had to.

Allow me to explain...

On May 30, 2007, ABC TV launched a new summer series, Traveler. No doubt inspired by the success of rival FOX's Prison Break, Traveler follows the misadventures of two young college guys who are on the run from the FBI for a crime they didn't commit.

The reason they are accused of the crime (the Oklahoma City-esque bombing of a New York City museum) is that one of their college housemates, a sketchy, technologically-savvy guy by the name of Will Traveler, appears to have framed them. Now Will has gone missing, and our two intrepid heroes must track down the elusive Will Traveler in order to clear their names.

Here (below) is a 3-minute trailer for the show that will give you a sense of how the whole thing revolves around the quest to uncover 'Who is Will Traveler?"

I caught the first episode of the series a day after it premiered, and while I quickly deduced the show wasn't for me (it was too predictable) I was struck by one thing: ABC and the producers of the show had completely missed the social media boat.

Halfway through the first episode, our heroic college boys are beginning to wonder if this Will Traveler guy they thought was their friend was really who he said he was. They begin to ask themselves questions about his background, and who this Will Traveler may be connected to. Then one of the guys decides to do some research into the mysterious Will Traveler.

Right about this point I'm thinking, OK, here comes the scene where they Google his name. But instead, one of the guys goes over to his girlfriend's house and rifles through printed (ahem) photos he has of Will Traveler.

When I see that, it suddenly hits me. These are American college kids in 2007. They wouldn't have a stash of printed photos. All their photos would be on Flickr or Facebook. In fact, why don't they just log in to their Facebook accounts and do some searching for Will Traveler there?

So that's what I do.

Nothing. Nada. No Will Traveler.

But surely hundreds, if not thousands, of fans of the show would be turning to Facebook to do their own 'investigation' into who the mysterious Will Traveler is? Think of the fun ABC or the producers of the show could have with this. Think of the buzz this would generate.

The more I think about this, the more excited I get.

So I do what ABC or the producers of the show should have done in the first place. On May 31, 2007, I create a Facebook profile for "Will Traveler."

And then the fun and games begin...

Stay tuned, as they say in TV land, my Will Traveler story will be continued in a week.

Is it possible to have an immersive, interactive, and on-brand marketing experience without even visiting a Website?

I believe you can, based on my recent experience interacting with the proprietor of the Pinewood Motel.

Here's the scoop: I'm watching TV and see a commercial for Sony Pictures' new horror film, Vacancy. Other than the fact it has some A-level stars in it, the film (and the commercial for it) looks like a typical slasher flick. Until the end of the commercial, that is.

Instead of the now de-rigueur Website URL, the following is briefly flashed on screen during the last second of the commercial:

I take the bait, grab the phone, and punch in the numbers:

And I am hooked.

I will be speaking at, and attending, the Canadian Marketing Association's Word of Mouth Marketing Conference, April 12, 2007 in Toronto, Canada. Unless I am mistaken, this is the inaugural year of this conference.

I believe we're going to attempt to define what viral marketing is. That alone should be worth the price of admission! ;+)

For more information about the conference, visit the official CMA Word of Mouth Marketing Conference Website.

I attended, and was a speaker at, iSummit 2006, March 29-31, 2006 in Toronto, Canada. This entry is the second of two featuring my notes from the sessions I attended.

John David, the Lead Program Manager for Xbox Live Arcade, gave attendees a tour of this next generation videogame console's Arcade service and revealed some other interesting factoids about the 360:

This session provided an overview and examples of "branded entertainment," long-form content that is partially or fully funded by advertisers as an alternative to conventional advertising tactics such as TV commercials. Examples featured during this session included:

Finally, and as luck would have it, at one point during iSummit I found myself sitting next to Salim Ismail, Co-Founder of PubSub. If you're a blogger, or interested in staying on top of what bloggers are writing about, then you must check out PubSub. It's described as "a matching service that instantly notifies you when new content is created that matches your subscription." Fair enough, but you really have to try it to see its power. If you're familiar with the Google Alerts service, then you will have some idea of the usefulness of PubSub, which 'reads' over 23 million blogs. While not a new service (it's been around since 2004), PubSub isn't that well known among the bloggers and marketing practitioners I have spoken to. I'm on a mission to rectify that! ;+)

For more about iSummit I encourage you to check out the iSummit blog and the iSummit Website.

A colleague of mine recently asked me if I had a list of viral marketing best practices. I guess I do - in my head - so it's about time I jotted them down to share with others. And before I forget.

If you're plotting the next Subservient Chicken or Liberal Leadership on eBay, here are 10 best practices to keep in mind:

I still kick myself for not following through on an idea for a book I had during the early days of the Dotcom boom. I had been on a business trip to San Francisco - arguably the epicentre of the Internet 'gold rush' - and while I was there I started to notice all the unusual places that URLs were plastered.

Sure, people were promoting 'MyGoofyBusinessIdea.com' on billboards and posters, but creative (or maybe desperate) marketers were also putting their URLs on other, uh, interesting things. Had I been more on the ball at the time, I would have started documenting this phenomenon with my camera.

Even without photographic evidence, I still thought it would be beneficial, even inspirational, to share with you some of the more memorable places I've seen URLs advertised over the years.

I'd love to hear about the strange places you've seen URLs advertised.